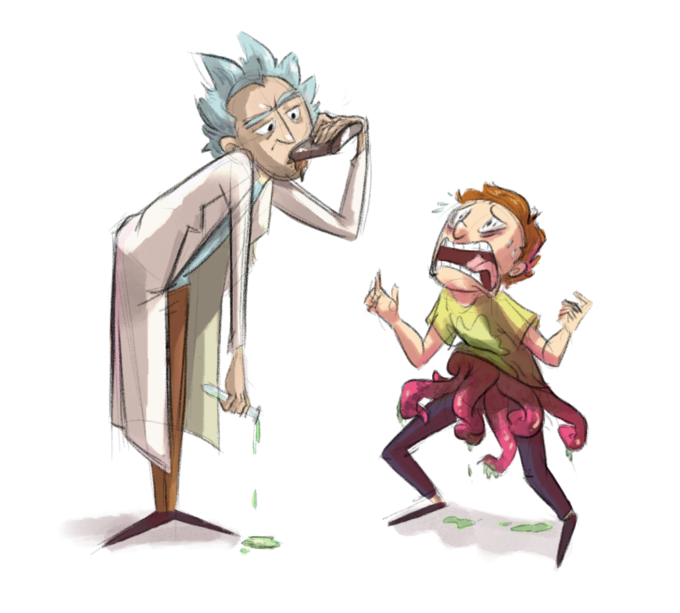 Then Rick came in with his portal gun and said ¨Morty I need help I accidentally started a war between galaxies. “Ugh again” groaned Morty “Morty *burp* this is no laughing matter this is a war, over the last known bottle of szechuan sauce.” Said Rick. ¨But Rick, i´m helping my dad look for a job or else he will get thrown out of the house!¨ said Morty, Rick said ¨Jerry, no one will hire you because you are worthless. It will probably be better for you to be thrown out.¨ “Hey you used to live under my roof and I don’t see you with a job” said Jerry, Rick says “ I do have a job” “what job?” Jerry says, “my job is to give Morty a better life and have a better role model than a hobo.” Said Rick. Rick says “i don't have time for this” then grabs Morty and leaves with his portal gun. Jerry yelling “WAIT!” but he was too late. Jerry says sadly “well i better start working.” When Rick and Morty get to their destination they are faced with the smell of smoke and laser blast marks everywhere. Morty pinched his nose to keep the smell out and said ¨what happened here?¨ then Rick said with a grim reply, ¨this is how far living things will go for a delectable bottle of szechuan sauce.¨ Licking his lips, Morty said ¨mmm szechuan sauce.¨ Then a big shadow towered over Rick and Morty and Rick said ¨well this isn´t good¨